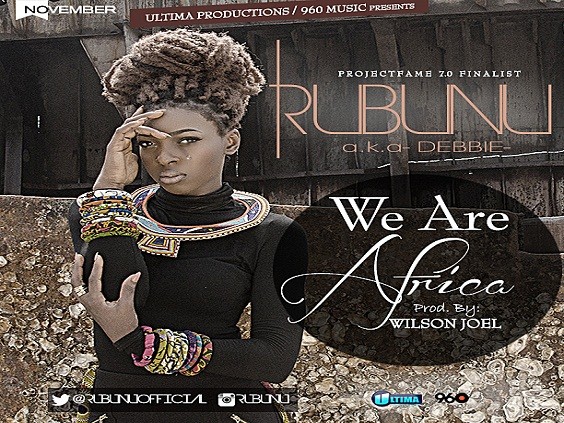 We kick off this feature with a song by Rubunu.

Yes, you probably didn’t get the memo, but Debbie of the  Projectfame cycle 7 fame adopted the stage name RUBUNU (and I have absolutely no idea what that means).

The 23-year-old did a Christmas collaboration with former house-mate Ugo before finally dropping the single up for review today titled ‘WE ARE AFRICA’, a song themed around unity and peace among the nations of Africa.

Rubunu’s style is a sweet fusion of Asa’s soulfulness, TY Bello’s urbaneness  and Lauren Hill’s multifariousness rolled into one; she’s undoubtedly a talented young woman. Her voice is also very unique on the Nigerian music scene which gives her an edge as female voices and songs seem to sound alike these days, (just yesterday I was listening to Chidinma’s newest single and could almost swear it was Yemi Alade until I actually heard ‘kedike’ somewhere in the lyrics. Or maybe it’s just me.)

This song We are Africa has this breezy feel to it that keeps you levelheaded and relaxed. To tell you the truth, I could opt for a song like this a hundred times over one that gets me jumpy. Life is too short to be stressing, abeg.

The intro begins with sounds from nature; a bird tweeting in the distance,loud leafy movements, crickets chirping somewhere, probably to depict some sort of African-ness. Then she does some freestyling that warms you to the song immediately.

The first line might immediately put one off, however:
I woke up this morning…

I mean seriously, I have heard that line like a million times in songs and I don’t mean that in a good way. You quickly recover from that as you listen on and soon you begin to nod to the rhythm like one enchanted.

When I initially heard this piece, it didn’t capture my attention. I couldn’t decipher what part was the chorus and which one was the bridge, and it also sounded ‘formed’.  Let me quickly explain that. You see, there are some songs that sound like they were composed in heaven and delivered directly to the singer from an oven of awe. They are just fluid, immaculate, divine in some weird lovely way. This song isn’t one of them.
Also, the part where she began mentioning countries almost gave the song a kind of sour taste, as it seemed she had forgotten her list of the countries at home and decided to say any countries that came to mind, and then somewhere along the line she forgot and decided to freestyle over it. My opinion.

These things notwithstanding, it is a good song with solid sound and production, totally applaudable for a debut single. There’s lots of prospects in her songwriting and a lot more in her voice.

Oh, did I forget to mention that the second verse was near perfect. Yeah, she managed to make that flawless. Great job Debbie!
And the ending? Smooth.

**
Message: I really like the message the song relays. I am a sucker for songs with an underlying message other than self-aggrandizement, women-objectifying and the life of the party, among many other vain things people sing about these days. Rubunu earns twenty-one Mazi feathers on her red cap from me for a tight message and a good song. Lol! I’m sure she can do so much better with the next song, but I’ll readily give this one my thumb-up.

Enjoy Rubunu’s ‘We are Africa’.

P.S.—I haven’t been able to upload music on this site due to some restrictions I am now working on, so bear with me. Soon. Very soon. 😉