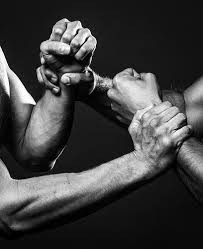 Aisha crouched, quietly measuring the weight of each plate of beans. She would lift one plate, tilt it left and right, place it beside her hijab-covered ears, as if expecting the plate to sing.  She would lift it up and put it down. Lift it up again, look beneath it, then put it down, only to repeat the same ritual on the next plate. Five plates in all, one belonged to father while the remaining four were for her and her siblings to share. Mama said she wasn’t hungry, as usual.

This was the only meal of the day. The next one would come tomorrow if sales went as expected in Mama’s tomato stall. If not, well, garri would suffice. Garri from Aisha’s friends.

Aisha was still on the exercise when Zainab entered.

‘Theif!’ she hissed. Aisha ignored her.

‘So you want the biggest ba?’

No response. She was in no mood for stupid remarks. She couldn’t help a ‘God punish you!’ in her mind though.

‘Is it not you somebody is talking to?’

An already livid Zainab moved closer and hit her sister hard on the head.

Zainab was the taller one, the younger one, the fierier one. She had won all their many brawls in the past, and this wasn’t going to end differently.  Aisha on the other hand had always been the one to let go.  She had been taught to. But today, she had come home with an overwhelming hunger even two plates of beans couldn’t fill. And she was going to put down anybody who stood in her way.

Zainab was pulling her hair now, and rendering cusses at her ancestors. They had been so engrossed they hadn’t realized Umar, their kid brother was screaming atop his voice.

Umar was laughing now and rubbing his robust paunch with both his hands. ‘Na joke. We wan chop!’

The three of them looked down. All the plates of beans had fallen over. Someone was going to die for real.

3 thoughts on “Beans and Brawls”