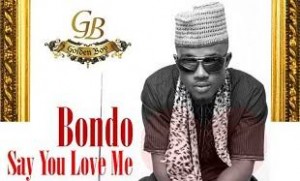 Bondo ‘Say you love me’

I have seen the really terrible cringe/barf-worthy music types from Nigerian artistes. I’ve heard songs that have made me want to bury my music player forever and just move to Venus and live there the rest of my life; songs that make me want to find the artistes and register an impactful knock right at the center of their heads.

But then there are others; songs that just make you shut your eyes and sniff and think of every good thing you know, from five naira ice-cream cones to 2016 SUVs. Bondo Krazzy’s ‘Say you love me’ is one of those songs.

I know. I don’t like that name too. Hello, what does ‘Bondo Krazzy’ even mean? I can understand Bondo as a surname, what the heck is ‘Krazzy’? I remember when I first heard of Mountain Black and Mad Melon, I almost peed my pants laughing. Nigerians rock at ridiculous names, I can’t even lie. But on second thoughts, who am I to judge the young man’s name if he does good music (which he does, by the way)? Shouldn’t we just leave the Mango-Stems and Fried-Onions to their names and sounds?

Bondo’s ‘Say you love me’ is a Hausa song with some of the tightest instrumentals I have heard( a little bird just twittered that Tayo Adeyemi produced this), and even though I have no idea what he’s saying 90% of the time, I absolutely enjoy the sound of it. The chorus, which is the only part with comprehensible English goes something like:

Not the deepest of lyrics if you ask me, but hold that thought until you see the video and watch water droplets threaten to tumble down your cheeks.

Call it swag, call it believability, call it likeability, Bondo puts it all in the video to this song with top-notch directing and props that whisper ‘Class!’. He has a signature cap he dons in virtually every appearance –a Mallam kind of cap– which if he uses just a little longer might actually stick. It’s interesting that this young Kaduna man whose real name is Nathan Bondo isn’t with the Chocolate City record label as everyone would assume. If you didn’t already know about Choc city, you know, probably because you have been under a rock for a while, it is known for young men who are mostly from the north, are good rappers, and manage to infuse Hausa into their music from a little to a lot depending on their creative muses. This is everything that Bondo is, with some extra swag on the top, and so we wonder if this is one starting a new revolution, or just a guy they wouldn’t sign.

However, it is hard to judge the success of one artiste by one song; we know all too well about one hit wonders, if the are anything to go by. It’s a good thing Bondo Krazzy has a few other singles on airplay and an upcoming album to judge by, and so we wait. Hopefully, they won’t turn out songs with clichéd lyrics that go nowhere. Hopefully. For now, let’s just wait and binge on some ‘Say you love me’ goodness.