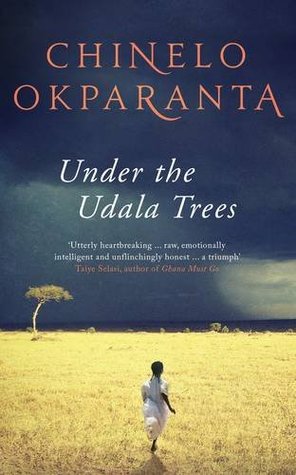 The first part of Chinelo’s novel reminds you immediately of Chimamanda Ngozi Adichie’s account of the civil war in ‘Half Of a Yellow Sun’. It is set in Ojoto in South Eastern Nigeria, and words like the bunker, Ojukjwu and the radio are constant features, as well as places being ‘taken’. Unlike Chimamanda’s account, Under The Udala Trees explores these similar events through the eyes of a child, eleven-year-old Ijeoma, who loses her father to the war. Then she ‘loses’ her mother to her father’s demise and is sent off to live with her father’s grammar-school-teacher friend in Nnewi where she is to serve as a house help. It is at this point she realizes she is attracted to women; at this point where she meets Aisha, a Hausa Muslim girl who has lost her family to the war.

In the second part, Ijeoma is thirteen and reunited with her mother who seems to have found some stability in Aba shortly after the war. But their relationship has taken a complete nosedive since Ijeoma is now considered an ‘abomination’ because of her affair with Amina.

Under the Udala Trees then focuses on Ijeoma’s life as she comes of age; her forbidden affection, her experience through secondary school, a heartbreak, a second chance at love and the enormous amount of pressure on her to conform to societal norms. This pressure becomes so intense that she succumbs to its hands and marries Chibundu, her childhood friend from Ojoto who she reunites with. She gives birth to Chidinma, and soon makes her the center of her world as she can no longer contain her frustrations of being with a man she doesn’t love.

The title, Under The Udala Trees is something the reader continues to look out for in the book. When he finds it eventually, or thinks he has found it, he finds yet another mention, then another and yet another, and then wonders if the writer isn’t over emphasizing it or if there is some hidden significance to it. If there was in the end, the reader (well, me, in this case) doesn’t see it, not in the light of the book’s theme at least.

Under The Udala Trees

The story has its high and low moments. It employs the use of flashbacks, seems like a private conversation between the reader and the protagonist in places, and characters like the grammar-school teacher (who interestingly isn’t given a name through the entire book) and his wife give the story humor and suspense. Ijeoma’s thought lines in response to her mother’s forced bible study sessions are brilliant and make you pause for a moment to ask questions of your own. It gets promising when the girls are sent off to secondary school. We anticipate a love that would blossom into something beautiful, as many secondary school relationships are wont. But it begins with nothing serious, picks up somewhere in the middle, then stops abruptly because Amina had a dream. The story would pick up again with Ndidi who is confident and introduces Ijeoma to the ‘church’ where queer people gather. The climax of this episode happens when Adaora, another lesbian, is caught at an invasion and burnt, and you feel your heart crumble in sympathy. But the story moves past this and follows Ijeoma to matrimony, and the enthusiasm and excitement moves with it. It feels, at some point, that the writer is unsure of where to take the story, especially when Ijeoma begins to tell stories to her daughter that have absolutely nothing to do with the plot.

Chibundu is quickly made into the villain, and it is both predictable and unclear. The story seems to make Ijeoma a victim and may have played out better if she left him just because she was not happy in the marriage, not because he became abusive of her. The story seems to blame everyone else for Ijeoma’s misfortunes. It also drags amidst excessive descriptions of places, the kind of descriptions we hurry past for boredom.

Under The Udala Trees ends with a forced epilogue it would have done better without. The intentions of the book are clear, but it seems to peep in and out of direction, leaving a faint taste of blandness on the tongue.