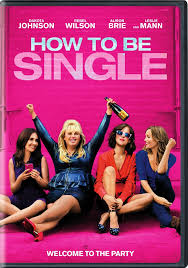 First, unlike Miss Steel, in the movie “How to be Single” Alice isn’t quite the frail and reticent embodiment of cuteness. She is instead more of a concupiscent and free-spirited every-day girl, who channels the sole desire of the ladies of her generation; a desire to take a break from the dogged routine called life and live out their hedonistic youthfulness with zest. Also instead of being one man’s kinky pet, Alice serves as the libidinous faucet for a number of men in the movie. Plus, there is her sudden transition from geeky-girl-next-door to a flirty, party-girl deviant; traits that I suppose would take Anastasia years to develop or maybe Christian Grey’s improbable demise.

The concise synopsis of the whole movie is centred on Alice’s desire to be free from the restraints, which often encumbers a modern day heterosexual relationship. As such, she temporarily dumps her college boyfriend Josh (Nicholas Braun) and heads into the Big Apple to work as a paralegal. There she meets and befriends her co-worker Robin, who is played by the ever ebullient and jovially inebriated Rebel Wilson, while she squats with her sister, Meg (Leslie Mann), an OB/GYN who repetitively declares her stale but obviously untrue desires not to have a child or any form of relationship.

The movie tries to superimpose two parallel storylines. There is the tale that revolves around Alice, Meg and Robin and the other which gives a cheeky glimpse into the lifestyle and drab emotions of local bartender and playboy, Tom (Anders Holm) and his Wi-Fi stealing customer Lucy (Allison Brie). Although, Lucy and the rest of the girls never meet or share any screen time together, Alice and Tom do; sleeping with each other twice and being disingenuously unperturbed about their tryst. Alice does however get serious with David (Damon Wayans Jr.) later on. The two hit it off and lost it vaguely apace, in what I would term one of the corniest break-up scenes ever. Her sister, Meg against her asseverated lies of not wanting a baby or a relationship ends up auspiciously with both.

Leslie Mann is an incredible actress but her portrayal of the big sister and emotional unstable aged single lady felt a bit vapid. Nevertheless, she and Allison Brie’s presence can be said to have fostered a positive hype for the movie given the latter’s moderately successful Rom-com “Sleeping with Other People”. But, they both seemed to have held back a little; not giving their characters the full push of their incredible talents; a strategy I suspect, was done in favour Miss Johnson; aimed at helping her prove critics wrong as regards her blockbuster debut as Anastasia Steel, being a fluke. Unfortunately, she does very little to negate such presumptions. Her portrayal of Alice, for lack of a better word, is quite rote. Her character’s emotions seemed forced and dispassionate.

And one may also find it quite ironic that for a movie titled “How to be Single” neither Alice nor any of the ladies involved in her search to find ‘Singledom’ where ever really single in the context of the word –save for Rebel Wilson’s type-casted comical character, Robin.

A movie with an ensemble cast such as this is expected to give more. Before its release, I am quite certain that a lot of feminist would have been excited to sit and enjoy 110 minutes of pure pleasure where male actors had to take the back seat while the ladies took the wheel. Not sure if they felt any sense of fulfilment after stepping out of the cinema. The movie is anything but feministic in its take on love, relationship and life. It is enjoyable but uninspiring; and on a scale of 1-10, I give it a 4.

Mifa Adejumo is a writer and novelist. He is a graduate of the University of Nigeria, Nsukka where he Majored in Mathematics. He is also an avid music, movie and book lover.