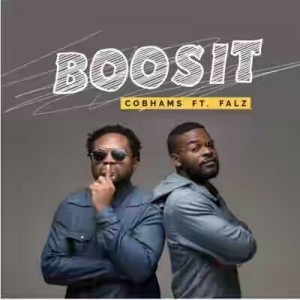 When you have a blend of an insanely creative producer/songwriter like Cobhams with a crazily hilarious rapper like Falz, what you get is just a Boosit. Simple.

I was going about my business amidst the bustles of Port Harcourt when Boosit came on the radio. I kept trying to figure out who it was that could have sung the chorus and bridge to these thoughtful raps of Falz’s. I almost guessed correctly at ‘Usually, I don’t do this but…’ seeing I am quite familiar with the same line from a popular 2007 hit, ‘Lele’ by Dekunle Fuji. But no, it couldn’t be Cobhams. This could not be the calm producer with finesse enough for four people. So I waited it out to the end, and when the presenter said it was a song by Cobhams featuring Falz the Bahd Guy, I knew the end of age had come. Like, What da Fudge?!

Boosit is all kinds of creative. And just in case you were wondering, it is the Ibadan connotation for the word ‘Bullshit’. It addresses varying issues from domestic violence to corruption in leadership; matters that need to be tackled head on. The hilariousness adopted in passing the message is what makes the song special. For a moment there, you begin to wonder when Cobhams became a Falz reincarnation with his many amusing expressions.

The melodies are well defined in the chorus. It sounds like a 9ice-2Baba fusion when you listen for the first time; the way several voice parts are combined with a tinge of fuji somewhere in the background. Even if you aren’t such a fan of rap, you can never be tired of Falz and his punchlines in this song which are audible, unambiguous and undeniably true for the scenarios he paints:

You tell the people that you’re having plansi
Stomach infrastructure, poverty neutralizing
Is so clear, its blackboard and white chalk
It doesn’t take a Einstein to know that it is planned work…
All your lyrics and your gimmick cannot fool me
Wo, I’m only patient I’m not stupid…

Boosit is the song of the hour. It speaks the mind of the average Nigerian impatiently waiting for the promised ‘Change’ to happen. In the third stanza, Cobhams goes on to say:

Whether you’re a husband, politician or pastor
If you cannot give the people whatever they ask for
Don’t promise them …

According to him, the inspiration behind Boosit is the fact that artistes hold the mic which means they have the power to address pressing issues in the world around them. This is spot-on, because while there are many songs themed around over-flogged topics as love, sex and money, people die daily from injustice, abuse and violence, and the onus falls upon the ones with influence to save others from similar fates.

I think that the intro-talk was enough talk for the song, however, and having to say anything at the end of the song was a little too much and uncalled for. Many times, the final moments of a thing are its most crucial, and when that is rendered flat, the observer easily forgets everything else and takes that home. That notwithstanding, Boosit does good. With a brilliant production of beats that leave an impression on the ears, and talent put to good use, Cobham’s Boosit is deserving of a standing ovation. And as for Falz? Just come and marry me already. Plix.