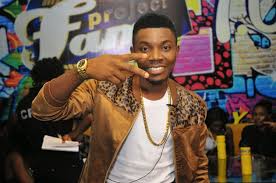 This should no longer be news: I follow MTN project fame West Africa like there’s an award for the most faithful viewer. For many years, I’ve chosen favorites in the different seasons, for different reasons, top of which are likeability and skill. Season 1, I liked Iyanya. I don’t consider him the most skilled at his time, but he was likeable. I’m not sure about now though. Season 2, Mike won my heart because he was outstandingly skilled, while David Omodunmiju was my sweetheart because he was downright likeable. I didn’t pay close attention to Seasons 3&4, I’m guessing OAU was doing me strong thing at the time so I needed to focus. Fast forward to season 5 and there I was loving up on Marvellous. I was so faithful I went for almost all the live shows, managing to grant a pissed-off interview to some jumpy journalist and his camera-man on the day the final results were announced and my Marvy did not win. I remember I also had a peculiar dislike for Ella; I have three facebook notes to show for it. (Fame Projections 1,2 and 3. You didn’t believe me when I said I was a project fame faithful, did you?)

Ofcourse, I loved Olawale of Season 6. I liked the others, at least the last six, but I was almost too sure Olawale was the best and deserved to win. Talk about a clean mix of likeability and skill. A little bird told me Chidinma too was like that in her time.
2014 and here we are, the week of the finals. This year has produced by far the most confusing season ever. All of them are exceptional, many of them are likeable, and if you look closely, they seem to all deserve to win. But this note isn’t about all of them.

This note is about a heart that is humble and sincere and kind, a heart that is Emeka’s, fondly called Emekus. You know how you’re just willing to choose a favorite from a lot based on good looks and swag yeah? Well, that was how it was for me at the beginning, and truthfully, Emeka seemed to fall short in both, so I took my eyes totally off him. Some weeks into the season, however, I started to get an idea of their personalities from the daily shows, and that’s when he began to stick out. Week in and out, we hear the faculty say something like ‘Emeka, we just love your heart. Your humility is amazing.’ And he would bow and walk away as though nothing was said.
He came in with the very interesting Igbo accent that showed even in his singing. You could almost wonder what he was doing in the house in the first place with all this seeming flaws. But Emeka worked hard! Soon, no one was noticing the accent anymore, just his beautiful singing. Soon, he was no longer the dude that just shouted into the microphone, he had it controlled. And even when he had to do exercises in the house that gave his accent away, he knew better than to sulk when others laughed. He never took himself too seriously. He made friends, He made fans, He gave his best, and we loved him.

The part that struck me the most was when the final eight contestants had their family members visit. Ok, so we already knew Emekus was from Ajegunle, he had sung it into our ears a couple of times. We also kinda knew he wanted the win more desperately than many others, because according to him, ‘Levels go change’ if he won. But when his mum came, and kept saying ‘My son, na you bring me come for inside Television’ with awestruck enthusiasm, we understood perfectly. I for one would have felt a little embarrassed (oya lie o…lie that you wouldn’t have felt the same), but no, not Emeka. He was even asking about her crayfish, and if she was making good sales. He was asking about his ‘goons’ at Ajegunle, talking frankly to his mum about how he wasn’t sure he was going to make the resumption for a school I’m guessing he just gained admission into, simply because he hadn’t yet paid his acceptance fees, and he was still in the house. Inspite of that, he still managed to assure his mum that even if he didn’t win anything from the competition, their lives were not going to be the same again because he was going to work hard, ride on the fame and training he had gained, and make a celebrity out of his mom. His mom, out of pure proud joy had brought him to his knees and begun to utter tons of prayers upon his head, and he kept resonating his ‘Amen’ like a church bell.
When his poor mum was leaving, she burst into a local song, and trust Emekus to help embellish it with his Phil Collins-y rich deep voice. She came out of the conversation room dancing with her son and was soon joined by the other contestants, who I believe were amazed at how much he was truly proud of her.

And there I was, somewhere in my living room, shaking my head and learning some good life lessons from the 26-year-old. I realize that in life you need more than a fine face to be special. In fact, you need neither a fine face nor swag to be. These are just icing on the cake that many times is too sweet and too harmful to actually be consumed. It’s just usually swabbed off the cake at the end of the day, while the main cake is eaten with relish. Your personality is what really counts in the final analysis. Your heart, your character, it’s quality, it’s strength.
Trust me, this is no means of canvassing for votes for this young man. As a matter of fact, whoever it is that wins this year, or becomes a runner-up is fine by me –I love ‘em all. However, no matter what happens, I’m certain Emeka will go far in life, in spite of his not so catchy appearance. No Sister, I didn’t say he was ugly. He is just not the most attractive of the lot. But his heart is attractive, and I’m sure that alone, will take him to high heights. I think we can learn a thing or two from him.