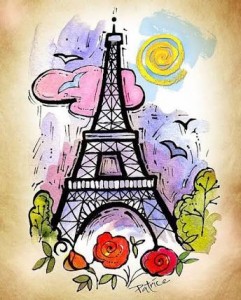 I have a dream.

(Don’t be fooled please, it’s not that deep. I understand everyone is being introspective now that Mark Zuckerberg is in Lagos, wondering what their life’s purpose is and how some don’t even have ten million naira to their names when the smallish genius is worth billions of dollars. Ndo. He is the one our mothers asked us about, the one they suspected had two heads. But this post is not that deep, so get the Martin Luther look off your face and listen to my dream. Ehen. )

So last night I had a dream. I was in Paris, or some French-speaking place sha, hopefully not Cotonou. And I kept looking at the people as they were ‘selling’ me with their French. It was frustrating, especially since I used to believe I had a hang of the language a little. When I woke up, I thought: Dear Lord, this is a sign. What are you saying, Lord? Am I relocating to Paris? In the spirit of faith, I started to dust that part of my brain that still held some French, and to my dismay, the French wasn’t even a cup full. Just the ‘ques que c’est’s and the ‘merci beacoup’s were left. I wanted to cry.

It is not my fault. Seriously. It is the fault of my eccentric, unconventionally interesting French teachers. I have had the craziest bunch. Let me tell you about them.

My first French teacher was a mystery. She had lotssssss (okay Ife, camdan…) of beads, and donned them to school every day. I remember she had a shawl too, and usually tied a scarf. A red scarf. She always looked like she was feeling cold. There was this thing about her that just made me cold too when she came close. Talk about the Osmosis of life. Or is it diffusion?

Well, she was a mystery, and it wasn’t because of what she wore or the speed of fluent French that came out of her mouth. It was because…
You know the song you sang during break in primary school?

Some have food but cannot eat…We have food and we can eat, glory be to thee oh Lord, Amen. – Aunty comman eat!!

(If you didn’t add that invite to it, asweh, iss not school you went o. It’s lesson.)

Aunty French took that part literally, people. She would actually come and eat. Your food. In your plate. With your spoon. Choi, it was weird. She would say:

‘Ifay, let aunty eat out of your cornnnnnnflakes (she dragged that part when she was carrying the base)’

My secondary school French teacher was a drama queen. She lamented about our generation for the most part. She spoke her French with a Yoruba accent and half the time she unknowingly taught CRK. There was this time in SS1 when I had a boil in my armpit (facepalm What? Didn’t you use to haf boil?). I raised the sleeve of my shirt just a little higher before she came into class and she came in and found me that way. She did not want to hear o, she called me out.

‘Keep kwayet! You too have join egbe kini-tisha-yoo-se* abi? Ehn? Olujuyigbe. You have joined them!’ she pursed her lips and ran her eyes over me like I was a piece of filth.

‘I say keep kwayet! Go and stand at that corner.’

When you are busy standing at a corner when you should be reading from your Nouvelle L’horizon, how do you want to understand?

Eventually, I had to drop the course at the end of my first term in SS2. There were serious courses like Further Maths demanding my time and French was merely optional. But Madam French would not take eet. She summoned everyone who dropped out (which was practically everyone that was taking the course before) and marched us to the principal’s office, drama queen style. Finally, when the principal would not take her side, she let us be.

So you see? Its not me o, its them. Doesn’t mean I won’t still go to the Paris sha. If we have to, we will mix it with Yoruba. Life is not hard jare, I have a dream.

**
Had any interesting teachers growing up? Share in the comments. Happy September!

*egbe kini-tisha-yoo-se: a group of people who say ‘What can the teacher do?’