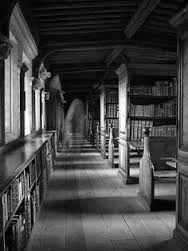 Blanca’s alarm startles her. 6:30pm. She looks around, realizing the library is empty. The man to her right has a wine scarf thrown about his neck and a goatee that makes him look scruffy. He is seemingly oblivious of anything else around him.

Behind her is a woman, about fifty. She hums her words as she reads them, and Blanca wonders why she finds that creepy.

There’s one other person, but she only sees his brown boots. His head is blocked by the line of desks before her, probably buried in a book as well.

There’s no cause for alarm, she assures herself as she returns to her past-questions collection. She would leave at seven.

6:45, it begins to rain. Heavily. And power goes out. An eerie quietness hovers upon the library in spite of the deafening noise of raindrops making contact with earth outside. She wants to leave, but she cannot see a thing.  She fumbles with her bag, attempting to get out her other phone: the one with a torch. Someone suddenly grabs her from behind; one hand covers her open mouth while the other snaps her neck.

When power comes back on, everyone is still in place. Blanca lies dead on the floor. Across the room, there are no brown boots.