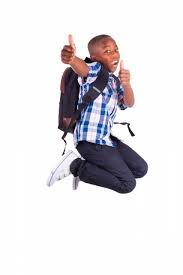 It looked like his large pupils would swallow me up. I shifted to one knee uneasily as I swallowed hot saliva forming in my mouth.
‘Seriously sah, it was nuh my fault.’
He said nothing, just his bulgy eyes fixated on me like a key in locks.
‘I took excuse from Miss Salami to go and wewenate. When I was coming back, I saw him on the corridor rushing to the toilet. I don’t know why he was rushing, sah. Maybe he wanted to poopoo hot poopoo because that’s how I use to run too when poopoo is catching me. Sometimes, I will just lose control and the poopoo will drop small in my pant before I reach the toilet.’
I saw him scrunch up his nose as though it was real faeces that was placed before him. I was babbling, I knew, but that was the only way I could stall long enough for him to change his mind about any lethal sentence he had in store. I continued.
‘So as he was running to shit the poopoo, I wanted to leave the road for him to pass and for him not to touch me, but I got confused: Is it left he wanted to go, abi right? And sah, you know I’m small. If he hit me, I will just die there and nobody will even notice. So, that was how I shifted right towards the wall and he too shifted right, and hit me with his shoda…!’
‘Shoulder!’ He barked, shutting me up.
‘Shoulder sir.’ I corrected. ‘Sah, I almost died. It was God that saved me. The pain started moving fast from my shoda to my…’
‘I said shoulder!’ He said angrily. His face was beetroot red, as though my grammar was giving him high fever.
‘Sorry sah. Shoulder. From my shoulder to my back, to my hip, to my leg. I did not even know when I landed on the floor.
Honestly sah, I thought he will just raise me up and say sorry and then I will just smile and say he should not worry,but when he stopped, he started shouting down at me that I am blind and that I am out of my mind. All this time I did nuh talk o. Until he gave me dirty slap!’ I made sure the ‘slap’ sounded louder and slightly prolonged, for effect.
‘I screamed. Then he started rushing me with blow. I managed to give him only one blow on the eye, and that was when Miss Salami came and separated us.’
I stopped talking, hoping that I had completely sold him with my cock and bull story. I could feel the indignation in his breathing.
‘Why then is he in the clinic, and you’re not.’
‘Sah, I don’t know. I think he is an ajebo so the place I hit him must have tore. And it was only one hit o’
He kept on staring at me with a glint of disbelief. I put on my best puppy-eyed look and hoped he will reconsider.
‘You are a bloody liar!’ he said, to my disappointment. ‘You will go on suspension for one week so you can learn your lesson, and explain what you did to your parents yourself. Get out of my office.’
I stumbled to my feet and instinctively rubbed my dusty knees with my palms. Then I turned and left his intimidating presence.
When I got to class to get my bag, I could read the respect on the faces of the class boys. I gave them my bad boy grin and bounced out of the class. Since my mom put me in this new school, all I’ve got was bullying and more bullying every single day. I had set a trap for the unsuspecting Akeem on the way to the toilet, and I had used a stick to pound his head so he could share my pain and send a message. And indeed, my message had been passed.

Strolling home at 11:15am in the morning when school children were still in school, I knew there was trashing awaiting me at home. But I was ready. Hopefully, It would not be as bad as the ones I had silently received by my school bullies. I would happily take mother’s trashing, and the tasty food that would come after it. And the little spanking that might follow at night. And the sweet long sleep I’ll have this night, and the night after till the week will run out. Yes, I’ll gladly take all those, for this was my liberation. My sweet sudden liberation.

6 thoughts on “My sweet liberation”